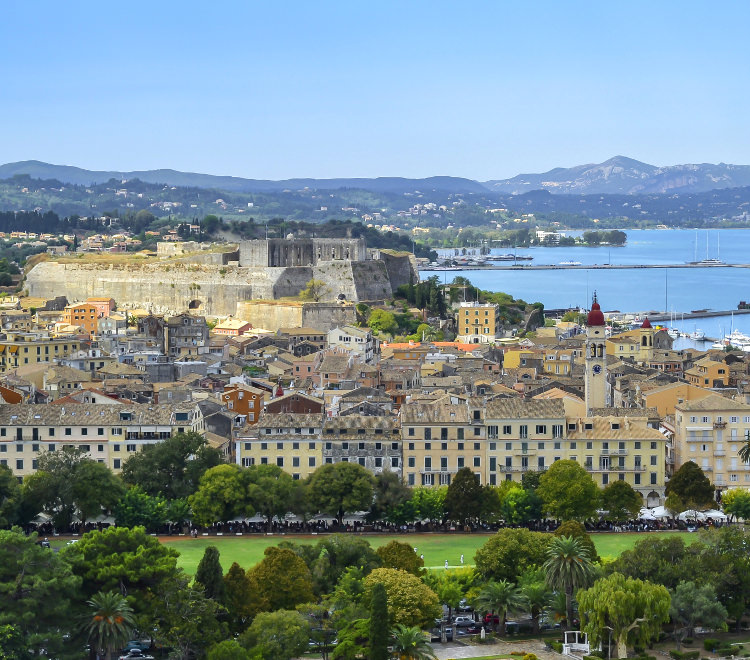 Overlooking the deep blue Ionian Sea, Corfu Town is the capital of the island of Corfu. Imbued with Venetian grace and elegance, historic Corfu Town (also known as Kerkyra) stands halfway down the island’s east coast. The name Corfu, meaning “peaks”, refers to its twin hills, each topped by a massive fortress built to withstand Ottoman sieges.

The three forts of the town, designed by renowned Venetian engineers, were used for four centuries to defend the maritime trading interests of the Republic of Venice against the Ottoman Empire. In the course of time, the forts were repaired and partly rebuilt several times, more recently under British rule in the 19th century. The mainly neoclassical housing stock of the Old Town is partly from the Venetian period, partly of later construction, notably the 19th century. As a fortified Mediterranean port, Corfu’s urban and port ensemble is notable for its high level of integrity and authenticity.

The old town of the city was inscribed on the UNESCO World Heritage List. A “must see” for every explorer. It lies on the northern side between the Esplanade Square and the new fortress. Ferries approaching the port of Corfu offer a magnificent view to this picturesque and beautiful town as it is located close by. The square of the Esplanade (also called Spianada) is the central square of Corfu Town and the largest square in the Balkans. It became a public square during the French occupation and was designed according to the French garden architecture, with many organised trees and flower pots.

Many other interesting monuments adorn Corfu Town, such as the Old and the New Venetian Fortresses, the Town Hall Square, the Square of the Saints, the Ionian Academy and the Palace of Saint Michael and Saint Georges. The town is filled with beautiful Venetian neighbourhoods such as the Kanoni area where are the ruins of the Ancient city or the beautiful area of Mandouki.