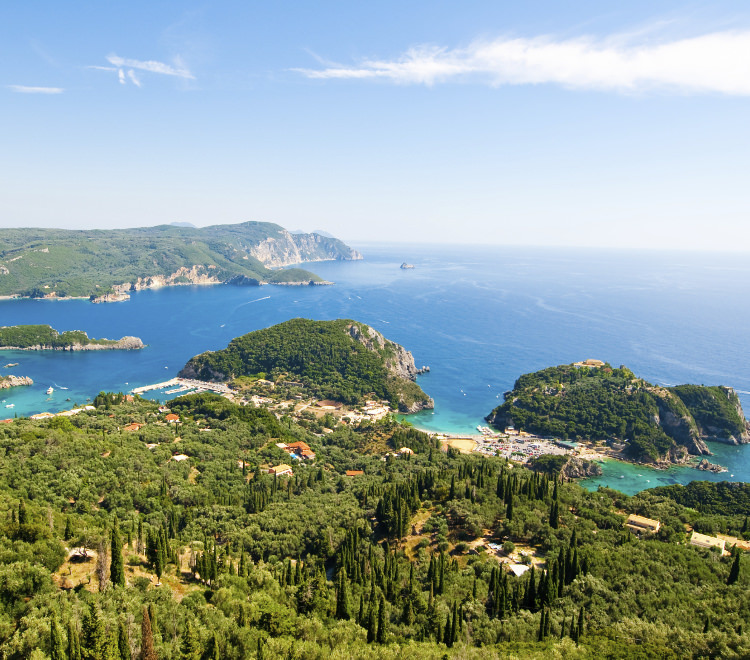 “Bella Vista” in italian means “Great View”. A group of villages just “above” Paleokastritsa offer breathtaking views towards the Ionian Sea. A definately must see when in Paleokastritsa and in Corfu in general.

The village dates from late Byzantine period and some of the house date from the 18th to 19th century. Lakones is set on the slopes of the Araki Mountain above Paleokastritsa and has some spectacular views, on the road towards the village there are plenty of viewing points and it is well worth stopping off to take in the views.

Doukades is a traditional Corfian village with its own Venetian style. The village dates from 1616 and the name of the village is thought have been derived from the first inhabitants who all had the surname Doukas, meaning Duke in Greek.  There is plenty to see in Doukades, there is a beautiful square, Venetian stone houses, a Neo-classical school building and the beautiful house of the Theotokis family.

Angelokastro is one of the most important fortified complexes of Corfu. It was an acropolis which surveyed the region all the way to the southern Adriatic and presented a formidable strategic vantage point to the occupant of the castle. It is strategically located in close proximity to Krini. It is believed to date back to the 13th century. An interesting remnant is an ancient church dedicated to the angels Gabriel and Michael which is surprisingly constructed in a cave. According to historical records, the Angelokastro was the capital of the island of Corfu and the Governor himself resided here.

A small but really picturesque village, built on the slopes of Istoni mountain, right after the Angelokastro medieval castle. The locals will tell you that   Krini has existed since Homer’s time, while, of course, their surnames refer to officials of the medieval Byzantine army. They are the descendants of the “Akrites”, the guards of the borders of the Byzantine empire.

Manage Cookie Consent
To provide the best experiences, we use technologies like cookies to store and/or access device information. Consenting to these technologies will allow us to process data such as browsing behavior or unique IDs on this site. Not consenting or withdrawing consent, may adversely affect certain features and functions.
Manage options Manage services Manage vendors Read more about these purposes
View preferences
{title} {title} {title}